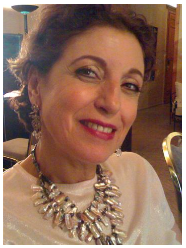 Rita El Khayat is a physician psychiatrist, psychoanalyst, a physician specialized in aeronautical medicine (Paris University) and an occupational medicine doctor (Bordeaux University). She graduated in anthropology from EHESS (School of Higher Studies in Social Sciences), Paris. She gives conferences and is a member of a number of international scientific institutions. She has been awarded many prizes, distinctions and honours in various countries and among them she was a candidate for the Nobel peace prize in 2008. She is a Knight of the Order of the Throne and Officer of the National Order of Merit in Morocco. She is also a visiting lecturer at Milan Statale University, as well as a writer (36 published books in different languages).

In radio, Rita El Khayat was a producer and the feminine voice in various literary talks, world music programmes and information and political news. She has also worked as a television presenter and producer of weekly artistic programmes. In the cinema she was and is still involved in many topics and activities, she wrote and writes on many aspects in regard to the arts and cinema; she has been selected as a juror in many festivals. She is currently President of the Moroccan Cinematographic Centre, which promotes awarding funds to film directors.