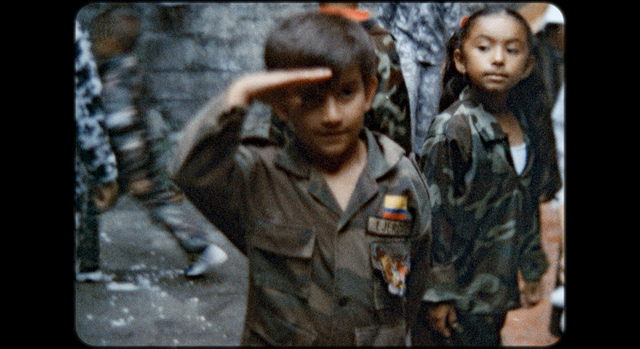  In this film essay, its director, Federico Atehortúa, alternates between television images of the civil war and home films in which he, as a child, plays as a guerrilla fighter

 The last screening of the Colombian film, which competes in the Film Festival’s Official Section, will be held tomorrow, Friday, at the Monopol Multiplex at 5 pm

Las Palmas de Gran Canaria, Thursday 28 March 2019.- The Colombian director Federico Atehortúa (Colombia, 1989) presented this Thursday 28th his debut film Pirotecnia (Colombia, 2019, 83 min.), a feature that competes in the 19th Las Palmas de Gran Canaria International Film Festival’s Official Section. The documentary, which alternates between Colombia’s history and his youth, is made of self-discovery tales constructed from the rescue of the indelible marke that military conflicts left within its creator’s family bosom. Starting from images that don’t always tell the truth, these false positives of young people being killed, dressed up as guerilla fighters, by the army to simulate military success are a key element of this intimate story. The film thus reveals itself as a powerful means to shape memories “in an honest way” from “autofiction”.

After participating in the Market of Almost-Finished Films’ second edition (MECAS) in 2018, Federico Atehortúa has returned this year to the Film Festival with Pirotecnia, a film essay that starts as an investigation about Colombia’s visual history but is deflected to the mother of the director when she stops talking. Thus, Federico Atehortúa’s attention is shifted into his own past, which includes television coverage of the civil war and home films in which he dresses up as a guerrilla fighter.

Screened at the Rotterdam Festival, in Pirotecnia its director questions “the nature of the spontaneous silence that his mother has suffered since childhood, thanks to contribution of personal testimonies, interviews and restored family videos”.

A family episode, which is not exactly the one portrayed in the film “but that has certain cinematographic characteristics”, established the line that later modified the rest of the documentary’s contents. But the Colombian filmmaker, explained, considers “it’s very important to talk from his experience to position what was happening in his country”, something that enriched him, also because he could add to this experience the fact of working with his parents.

Pirotecnia dates back to March 6th, 1906, when four men were executed for attempting to kill the president of Colombia, Rafael Reyes. The event was photographed and the pictures were used for a fictionalised film about the facts. Since then, the country’s cinema has been linked to its violent history. The moving pictures have been used for historiography, propaganda, disinformation and also for instilling unity in a nation that refuses to get together.

After a long investigation process, explained the young director, he did not have any trouble getting access and compiling archive files since “in Colombia they are also interested in projects that try to recover and revive these materials, so they are welcome”. “This gave him complete freedom”, he stressed.