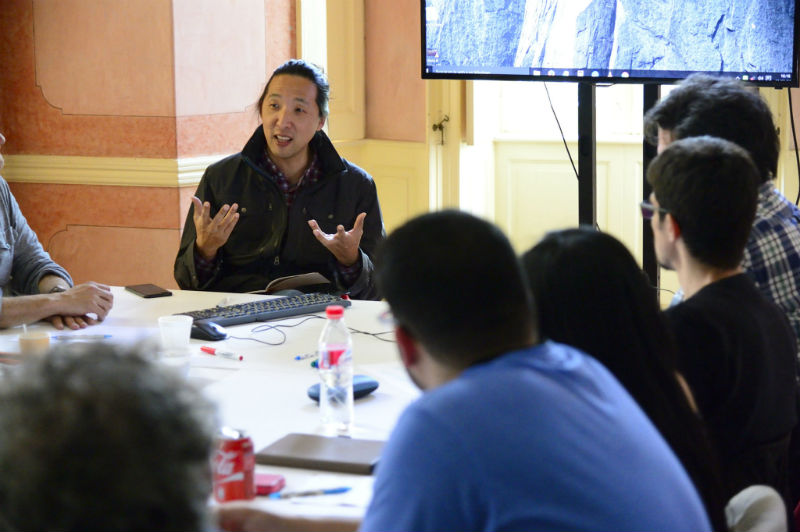 Las Palmas de Gran Canaria, Friday, March 24, 2017. The Las Palmas de Gran Canaria International Film Festival resumes in 2017 the workshop and educational conference program set in motion in past editions. In this one, it will again have first-class professionals who will bring different facets of film creation to those enrolled in the varied workshops and courses. The essay film, acting for film and television, and the experience of four filmmakers make up the course program whose entry period is already open.

The Panorama Spain course begins the meetings at the Palacete Rodríguez Quegles (4 Pérez Galdós Street): master classes by directors Elías León Siminiani (Friday 31), Fernando Franco (Saturday 1), Isaki Lacuesta (Sunday 2) and Virginia García Del Pino (Monday 3), all of them participants in the D-Generación cycle programmed by the festival ten years ago. This cycle echoed subterranean trends of the Spanish non-fiction. Starting next Friday, these four filmmakers will share their working processes and personal experiences during the development of their projects, from the idea to the production, shooting and editing. Such meetings resemble a personal diary that shows us the other side of current Spanish cinema. Their timetable is from 11 a.m. to 12:30 p.m., and are attendance-free until seating capacity is reached.

The Madrid Film Institute proposes two workshops, at the Palacete as well, named That’s how a film is made and New actors for film and television, which will bring the uninitiated and those interested closer to the film and acting process, respectively.

Actor and director Esteban Roel will be the one in charge of teaching the New actors for film and television workshop, designed for those who want to have their first experience as actors/actresses in a practical, useful and enjoyable way in April 1 and 2 (from 4 to 9 p.m.). It has a strong practical approach and does not require previous experience or formation. Esteban Roel, its teacher, has directed, along with Juanfer Andrés, Musarañas, a film produced by Alex De La Iglesia, and starred by Macarena Gómez, Nadia De Santiago, Luis Tosar and Hugo Silva, for which he was nominated to the Goya Award for Best New Director. He is the director of the Madrid Film Institute’s Associate Degree in Interpretation.

In April 4, 5 and 6 (from 10 a.m. to 2 p.m.), Juan Fernando Andrés (codirector of Musarañas) will teach the workshop That’s how a film is made, halfway in between teaching, a leisure activity and artistic creation. It has been designed for those who want to have their first experience in “making a film”.

Both workshops accept a maximum of 30 people per workshop, priced 30 euros each.

The workshop on essay film taught by Javier H. Estrada will also take place at the Palacete, with a maximum limit of 15 people, in April 3, 4, 5 (from 5 to 8 p.m.) and 8 (from 10 a.m. to 2 p.m.). Estrada is a film critic and programmer who, since 2015, runs the FILMADRID programming and, since 2013, is a member of the Independent Lima International Festival’s programming team (Peru). He is a member of Caimán, Cuadernos de Cine y Secuencias’ editorial department, too.

In recent years the essay film has prevailed as the most useful and innovative discipline to reflect on past and current cinema. Reviews made from film pictures have proven as valuable for film analysis as traditional written reviews, being able of communicating ideas and thoughts words do not reach. Authors such as Adrian Martin, Cristina Álvarez López, Kogonada or Kevin B. Lee have revolutionized this discipline to the point of elevating the essay film to the category of art. Yet this technique is barely used in Spain. The workshop will delve into the essay film’s limitless possibilities with three first lessons dealing with the screening and discussion of the different forms and approaching strategies to the discipline, and two days for the making of a work that will be screened and discussed by the rest of the participants during the workshop’s last session. Attendance to this workshop will be priced 40 per person (32 for students and the unemployed).

To enroll the workshops, those interested should contact the Parallel activities’ team of the festival through the email: actividades@lpafilmfestival.com.