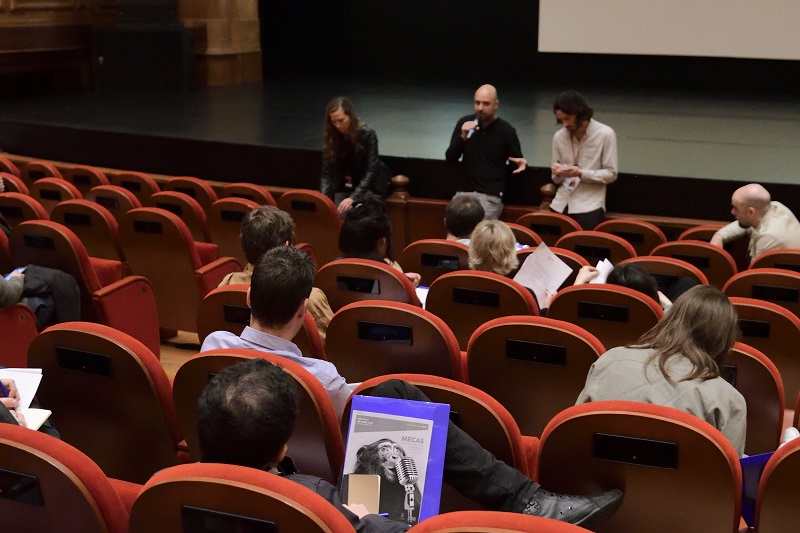 Due to the great reception it had in 2017, the Market changes location, taking in this edition the Guiniguada Theater as its only seat, in which the footage presented will be analyzed and the expected meetings and presentations held. Their objectives, nonetheless, remain intact: MECAS seeks to support the post-production and festival distribution of independent films targeting creative experimentation.

The Market brings together independent filmmakers with producers and potential co-producers, distributors or sales agents, as well as programmers from International Festivals, who will give their opinions about the submitted projects. In addition, it will have a jury in charge of assessing the works and granting a winner, who will receive a 8,000 euros award for the post-production or distribution of the film.

MECAS aims to become one of the referential events in Europe for projects that are in final stages of production or post-production. For this second edition, the team that runs it has received 63 works -almost 30 more than in its first year, in which 34 projects were submitted.

The works submitted to the second MECAS, and which compete for the prize, after having stood by their proposals and showing 20 minutes of footage, on April 9 and 10, are:

The committee that will assess the projects and provide advise and counsel to the participants is made up of the president of Mogador Film, Christoph Toke, a production company whose films have been in around 740 festivals in which they have won 160 important awards: the coordinator of programming at FID Marseille, Fabianne Moris; the Italian producer, currently settled in Paris, Luciano Rigolini, who has produced works by Chris Marker, Alexander Sukurov, Naomi Kawase, Alain Cavalier, Apichatpong Weerasethakul and Tsai Ming-Liang, among others; Memento Films’ head of international sales and acquisitions, Tania Messner, who got to her job after working in festivals such as Berlin, Cannes and Vienna; the one in charge of festivals within the international sales agency Stray Dogs, Lison Hervé, a professional that started her career in the Sales and Festivals department of Memento Films; the international sales expert of Alpha Violet, Keiko Fumato; the producer of Ciné-Sud Promotion, Thierry Leneuvel, the delegate of a company that stands out for its commitment to art-cinema; a consultant of the Karlovy Vary, Susana Santos Rodrigues, who is in charge of advising the Film Festival about Latin American and Portuguese films, besides working as an evaluator for the MEDIA Creative Europe program and been a member of the selection committee of the Rio de Janeiro International Film Festival and the Dutch Hubert Bals Fund; the consultant Olimpia Pont Cháfer, a programmer of festivals such as FICCO (México DF), the Valencian Cinema Jove or the Seville European Film Festival, in which she currently works as a representative; the doctor and professor in Audiovisual Communication at University of the Basque Country, Vanesa Fernández Guerra, who also works as a guest teacher at the Master’s Degree in Theory and Practice of Creative Documentary of the Autonomous University of Barcelona, among others, besides having published as a researcher several works on contemporary documentary filmmaking; the director of Festival REC (Tarragona) and programmer of Tallinn Black Nights IFF, Xavier García Puerto, a professional that has organized screenings and selected programs in countries such as Brazil, Israel, Russia, USA, Colombia, Slovakia or China; the film critic, journalist and director of VOS, Martín Cuesta, who directed Cinema ad hoc until 2016, and is also a collaborator of different media related to the film industry; the co-founder of CINEBINARIO, a cooperative distribution company of independent cinema, Alberto Sedano; the director of Capricci Cine, Diana Santamaría; and the one responsible for La Incubadora, a development program that promotes internationalization of emerging producers, Gemma Vidal, whose career has been built, among others, in the production and distribution company Avalon.

In addition to the competing projects, any professional willing to participate in any of the meetings will be able to do so. The Market includes once again in its program the section MECAS ISLAND, a day devoted to local projects that could benefit from the presence in the Festival of professionals and experts related to the film industry.

MECAS strengthens MECAS ISLAND in 2018, presenting it as a dynamic and fun event in which interaction with film-industry professionals will be intense and nimble, with work breakfasts, a pitching session (which is a concise but effective enough presentation to draw attention from the interlocutor, in this case a board of experts led by Isona Admetlla, who will try to provide some advice for the future of the given project). Moreover, MECAS ISLAND shall provide those enrolled with an express workshop on preparing a Pitching, Marketing and Distribution, as well as offering counsel and introducing them to the access to the programs Europa Media and Eurimages.

Registration and participation for ISLA MECAS, that will take place on Monday, April 9, from 10am to 7.30pm, is now open until Friday 6. After listening to the participants, ISLA MECAS will also award the most solid project with a travel bursary funded by the Canarian Government.

Journey of works that participated in the MECAS 2017

Some of the works that took part in the first edition of MECAS have not only manage to successfully get past post-production and distribution, but they are drawing attention of programmers from prestigious international festivals.

Mi espía íntimo, by Ana Schulz and Cristóbal Fernández, winner of MECAS’ first edition, will be released, after changing its title to Mudar la piel, at a prestigious European independent film festival.

Niñato, by Adrian Orr, not only manage to get into the Official Section of BAFICI Festival but returned to Spain after winning the first award of the competitive section. In addition to the long tour the film has made throughout worldwide festivals, its director will be this year a member of the Short Film Jury of Las Palmas de Gran Canaria International Film Festival.

En busca del Oscar, by Octavio Guerra, very linked to the Gran-canarian Festival, in which it shot part of its footage, was also submitted to the first MECAS, after which it went to the Berlinale and kept on touring through great international festivals.