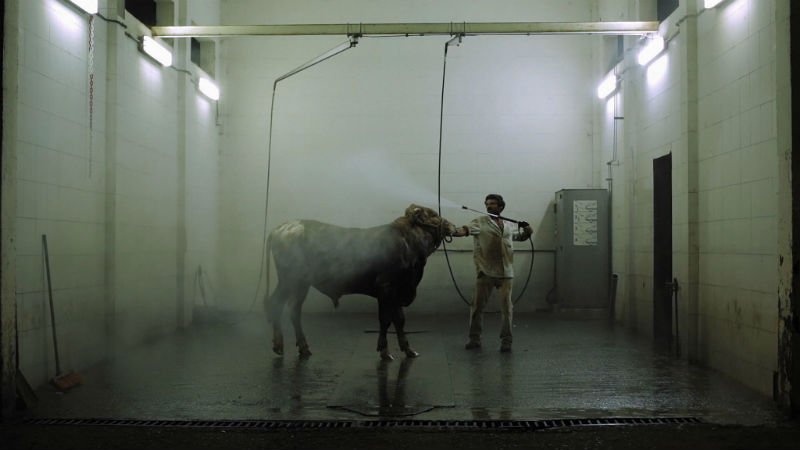 Sixteen short films of very different origin, all of them on release in Spain, make up the Las Palmas de Gran Canaria International Film Festival’s complete official section (March 31 – April 9). These titles, that come from twenty countries of the five continents, reflect, just like the feature films’ section, the thorough worldwide search the festival has made. Among them, there are two Spanish works: a coproduction with Holland, The I Mine (Emilio Moreno, Spain, Netherlands, 2017, 27’) and a Canarian one, The Painted Calf (David Pantaleón, Spain, 2017, 10’) -on the picture- Both feature and short film sections are supported by Canarias Cajamar Foundation.

This edition’s scheduling of short films, coordinated for a second year in a row by José Cabrera, keeps on betting on a cinema that entails a formal stylistic risk and on an unusual introduction to contents already varied. Each screening is proof of the current short films’ diverse reality, with essential elements to reinterpret our own reality. It is the filmmakers’ intuition, who deconstruct the film language discourse to reformulate narratives from a unique point of view. We shall find, among the selected works, tributes to outlawed genres, complex political discourses, returns to a lost spirituality, otherness’ beautiful depictions, panegyrics to memory, binary migrations or philosophical lessons.

With the first Spanish title already mentioned, The I Mine, Moreno manages to link a diverse triple search on earth: that of humanity’s origins, that of wealth and that of the self. He thus creates a human being’s tale that reflects on himself and his fleetingness from the Australopithecus from two million years ago to nowadays. The second competing Spanish short film, The Painted Calf, by David Pantaleón, a Las Palmas de Gran Canaria Film Festival’s veteran already known in first-rate festivals. On this last work, Pantaleón gives us a new biblical image with echoes from the Canarian society and folklore.

Premiered in the Directors’ Fortnight at Cannes, Abigail is a very important work in Latin America that has barely been seen in Europe. Directors Isabel Penoni and Valentina Homem’s work focuses on memory, traditions and Afro-Amazonian rites. Centaur, Nicolás Suárez’s short film, a musical neowestern that updates the gaucho myth with a huge visual attraction, won a Special Mention at the last Berlinale. The Cuban Duel is a disturbing piece about dreams and the monsters that haunt a young boy; the clash in Sierra Maestra between the material and immaterial, reality and fantasy in the life of a boy and his mother. The section’s fourth American title is Ears, Nose and Throat, one of last year’s most acclaimed short films, with selection at Rotterdam, Toronto, London or New York. An unusual reflection on daily violence that compares physical and psychological damage.

The first one, Because the World Never Stops, by directors Maximilien Van Aertryck and Axel Danielson (Ten Meter Tower / Hopptornet, Sweden, 2016), returns to sociological analysis through the image of people going through stressful situations. In this case, some television hosts show the other side of the daily theatrical informative process. The German title, Call of Cuteness, gathers funny online videos sifted through with its young director’s animation, recently arrived from the Berlinale. A sinister look to the cat world and its online legions of fans.

The French title Goût Bacon portrays a vital and subtle vision of suburb teenagers’ relationships; drops of intelligent humor and second readings on the international release of this short film that brings freshness to a film subgenre thought within a studio, in this case for young people. Similar to the German short film, Hiwa is a tale from a childish point of view that mixes the Filipino imaginary with the Greek one, arrives to the festival directly from the Berlinale.

The Croatian short film Zvir, released on the Directors’ Fortnight at Cannes, is a fiction dealing with the demolition of illegal constructions that takes us from the Balkans to the legacy the old Europe leave to future generations.

Finally, the coproductions mentioned before: the Belgian Vietnamese No’i is a pleasant surprise from the Belgian school, awarded at Winterthur, a film of observation with huge discoveries; the Portuguese Mozambican Nyo Vweta Nafta, a brilliant piece from the new Portuguese crop that was released at Rotterdam; a reflection of some Inhambane youngsters’ dreams and aspirations.

After its appearances in three of the great festivals (Venice, Toronto and Sundance), the festival brings Dadyaa, one of the most surprising short films from the Asian continent, with a breathtaking photography and superb sequences that will make people talk. Nightfall, a mainly political work filmed by one of the most renowned directors within the current film scene and a videoartist. Finally, the Australian Slapper is released in Europe in this festival after appearing at Sundance. In it, Schroder creates the fiction of a universe worth of Minervini where she changes the Trump voter for the Aussie suburb.