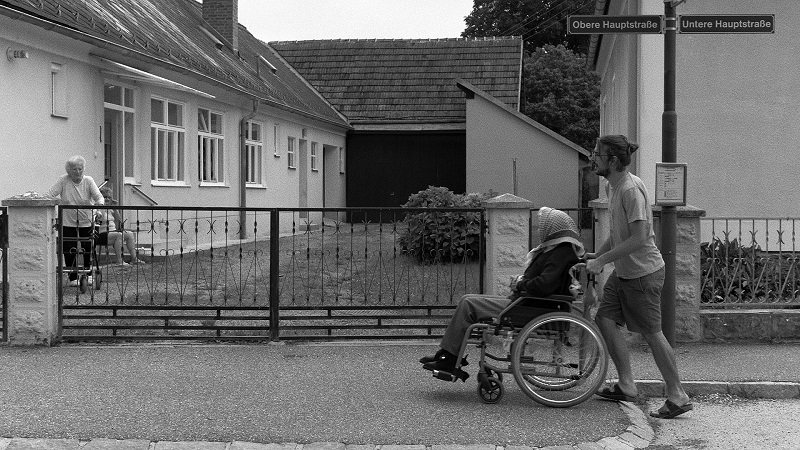 ➢ The film focuses on Fannie, a nonagenarian as much worried about the pandemic as about his grandson’s activism on the Sea-Watch. All of it told from the small Jabing, a village of barely 700 inhabitants

➢ “Our contribution to building a fairer society begins here and now, and not tomorrow or in a strange place,” emphasizes the filmmaker

➢ “For me, there’s no distinction between my work as a filmmaker and my commitment. There’s no such duality.”

Las Palmas de Gran Canaria, Friday 22 April 2022. Der Stille Sturm is the third title included in Canarias Cinema’s Feature Film section: a work by Cristina Yurena Zerr Sarmiento that the Las Palmas de Gran Canaria International Film Festival will screen on Sunday, April 24, at Cinesa El Muelle. The film, a meticulously made documentary of close looks, focuses on Fannie, a 94-year-old former landlady who is struggling with aging and death in the midst of a global pandemic. Her personal migration story to Canada gets interweaved with the forgotten dead in the Mediterranean, where her grandson Jakob is present as an activist: he spends a while rescuing immigrants on board of the Sea-Watch 4.

The audience is seduced at first by the place where Zerr has set her work: Jabing, a village of barely 700 inhabitants in the Southern Austrian region of Burgenland. There we find Fannie, who is approached by the filmmaker’s camera. Thus, Zerr deals with the different sides of the global migratory phenomenon from the most local environment possible.

“This work started with no particular objective,” reveals Zerr, who points out that “I didn’t have the idea of making a documentary from the material I was filming. The film grew little by little. The truth is that, a beginning like this, without any real intention, allows you something so special as to being able to film honestly and with a wide-ranging look. Something that sometimes gets lost when you think of a more specific project from the beginning.”

“Here,” she continues, “I started with pure observation. There was no background subject that influenced me (for instance that of migration): I just wanted to somehow capture what was happening in front of the camera. As time went by the topics were taking shape, I was following those clues that interested me.” Although it wasn’t “until the middle of the process when I found Jakob and his activism on the Sea-Watch. I found it interesting to show his commitment not from the Mediterranean, but from his home in Jabing, and many times from her grandmother’s point of view.”

The filmmaker proposes a reflection on a global problem from a place like Jabing, with 700 inhabitants. Basically, because she is convinced that “our connection with our surroundings, with the local, is essential. Change starts there. But obviously,” she adds, “in this globalized world we inhabit, we are also connected to the most distant places. Either a person from Bangladesh who makes clothes that’ll be sold in the next-door shop or Brazil’s forests that are being destroyed because of our meat consumption.”

Zerr accepts that “we live in such a complex world that it is hard, almost impossible, to solve problems from a global standpoint. This causes a feeling of impotence, because there are so many injustices, violence and oppression are so enormous… However, if we focus on local things, without forgetting that global structural actions at a political level are also necessary, we see that we can contribute with a lot of solutions.”

The director maintains that “our contribution to building a fairer society begins here and now, and not tomorrow or in a strange place. Only through a global analysis and local action are we going to acquire a true conscience in regards to the necessity for a radical change in our way of living together in this planet.”

“I wanted to show that in my work: if countries keep letting people who cross the Mediterranean or the Atlantic die, we need true organizations such as Sea-Watch. But we also need people who can take in those who come, who accompany them in this hard process of starting a new life in another place,” elaborates Zerr.

In Der Stille Sturm the author offers different perspectives on religion and Christianism, “from its traditional and institutional standpoint to a more critical one. There are,” she points out, “movements, political parties and people who claim to be Christian and who, nevertheless, see no contradiction between their religion and the disdain for migrant, for instance.”

“But also, although I fear they are a minority,” she continues, “there are people, movements, and churches to whom being Christian means sheltering the homeless and not letting the other die, no matter their nationality or their beliefs.” In that regard, she points out that “the German Protestant Church was the biggest donor of the Sea-Watch 4. And at the same time, the CDU/CSU —the democratic-Christian party in Germany— keeps pressuring for refugees not to get to Europe.”

“I’m sometimes surprised,” says Zerr, “by our inability to make certain connections, to link certain things to one another. Not seeing that in the histories of European families there’s been a lot of migration to other continents out of necessity. My grandparents migrated from the Canary Islands to Cuba due to economic reasons. Fannie, Der Stille Sturm’s main character, emigrated from Austria to Canada in the 50s because Austria was destroyed after the war. And yet, nowadays, migrating because of ‘economic’ reasons is not an accepted need. There’s no right of asylum, nor the possibilty of obtaining visas. Obviously, this rejection is based on racist ideologies: thinking that a person is inferior and doesn’t have the same rights.”

“We see this today if we look at Ukraine’s situation: people who flee from bombs are rejected and not taken in like the others because they have passports from African countries, as it’s happening with lots of students,” points out the filmmaker, who has needed less time to finish the production of this “unplanned” feature than with other works “which are taking me a lot of time. I work very slowly when approaching what I’m interested in.”

To what extent does Zerr think a filmmaker’s look needs to get involved? “For me, there’s no distinction between my work as a filmmaker and my commitment. There’s no such duality,” she states. “Art work comes from questions that move you, from personal interests that are always connected to my surroundings, to our way of living.”

The filmmaker points out that “I’ve found the process as important as the final piece. I chose the camera and cinema as my tool, but it could be any other if I could ask, tell, reflect and observe the world I’m in.”

Cristina Zerr works as a photographer and filmmaker. She’s made the documentary Of Saints and Rebels and the short film Von Mauern und Rissen. Grenzgedanken. It is her first time appearing at the Las Palmas de Gran Canaria International Film Festival, to which she comes “eager to know it. I’ve read that Sean Baker is coming to present his work, which makes me very excited. I loved The Florida Project!”