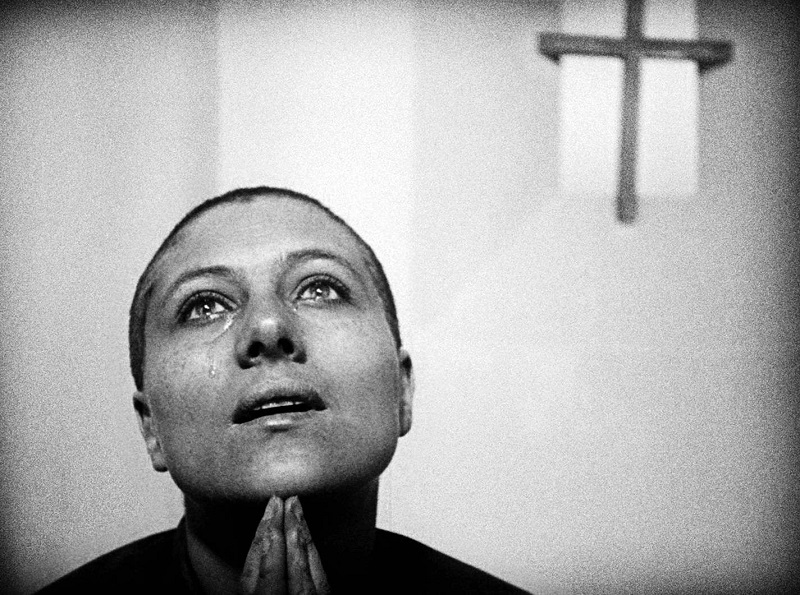  At 8:30 p.m. this Saturday, the section will Carl Theodor Dreyer’s white-and-black silent feature, and it will do so with live music performed by expert on historical string instruments Carlos Oramas, who will be accompanied by Adrián Linares and Diego Pérez

 Tickets to attend the event cost 4,5 euros and are available at entrees.es or through the corresponding link enabled at lpafilmfestival.com

Las Palmas de Gran Canaria, Thursday 21 April 2022.- Almost a century ago The Passion of Joan of Arc premiered in Denmark. For many decades that remained the only time Carl Theodor Dreyer’s full work could be enjoyed. Because, after its release in 1928, the film had to face numerous difficulties that made it seem as if the original creation by the Danish filmmaker had been lost. But the discovery of certain forgotten canisters inside a closet of a Norwegian mental institution changed the course of this piece’s history. Now considered a landmark of the seventh art, the section Camera Obscura of the Las Palmas de Gran Canaria International Film Festival has recovered a restored version of the silent film and will screen it with live music by expert on historical instruments Carlos Oramas, who will be accompanied by Adrián Linares and Diego Pérez.

The screening will take place this Saturday 23 at 8:30 p.m. at Miller. Tickets to attend it cost 4,50 euros and are available at entrees.es, as well as through the corresponding link enabled at lpafilmfestival.com. Those who attend will be able to enjoy an art work that was commissioned to Dreyer by the Société Générale des Films in France during last century’s late 20s. Among the three options he was offered, the filmmaker chose the Maid of Orleans, who had just been canonized barely eight years before that. Such choice meant for Dreyer over a year of researching the transcripts of the saint’s real trial, who was burned at the stake in Rouen in 1431 after being declared guilty of heresy by the English crown, whom she faced alongside the French army during the last stages of the Hundred Years’ War.

As a matter of fact, the director centered the screenplay in this moment of her life. And he did so by firmly committing to close-ups, which have caused the film to be described as a “symphony of faces” among which the face of its lead stands out the most: French actress Renée Jeanne Falconetti, artistically known as Maria Falconetti. Her portrayal, in addition to Dreyer’s direction and its later production, made The Passion of Joan of Arc a masterpiece that has managed to go down in cinema history.

But becoming a landmark within the industry’s history hasn’t been easy. Since it premiered in Copenhagen in 1928, and before arriving to Paris’ big screen months later, the film had to suffer censorship and many cuts of its scenes, as well as bad reviews. Ironically, as it happened to Joan of Arc, the piece fell to flames, too. It did it twice. The first time was at the end of the same year it was released, when a fire took over UFA’ studios in Berlin, destroying the film’s original negative. Only a few copies of Dreyer’s original cut existed. Because of that, Dreyer created a new version using alternate and initially unused takes, which was also destroyed in a 1929 lab fire.

Four decades later, different versions of the film started to get re-released, although they weren’t accepted by the director due to the significant changes they included. Nevertheless, the course of Dreyer’s creation changed in 1981 when an employee of a mental health institution in Oslo found several film canisters in a janitor’s closet that were sent to the Norwegian Film Institute. Three years after their arrival, it was discovered that they were the original cut made by Dreyer, who was nominated for his work in numerous occasions throughout his career, winning several awards at the Venice Film Festival: the 1948 International Short Film Award for Landsbykirken, the 1955 Golden Lion for Ordet or the 1965 FIPRESCI Prize granted by international film press for Gertrud.

The Passion of Joan of Arc’s discovery has allowed it to be enjoyed just as it was intended. The copy has appeared at several film festivals all over the world, and now arrives to the Gran-Canarian capital, where it’ll be screened this Saturday 23. For this screening, according to what Luis Miranda, the director of the FICLPGC, explains in the catalogue, “the Festival is using the version restored by Gaumont, under the umbrella of the French CNC.” Specifically, this 81-minute version “has been remastered at 20 frames per second, compared with the usual 24, to recreate the original experience of the film just as it would have been seen when it was released.”

Furthermore, the screening will be accompanied by virtuoso Carlos Oramas’ music, an expert on historical string instruments, especially the lute and the theorbo, who will lead a trio formed by himself, Diego Pérez, expert on the Baroque cello, and Adrián Linares, expert on the Baroque violin and director of the group El Afecto Ilustrado the three of them are members of. The musicians will give a live concert around the French heroine figure by using a French repertoire from the 15th to the 17th century that includes works by Thomas Crecquillon, Joaquin Desprèz, Adrian Le Roy, Pierre Attagniant and Robert de Visée, among others.

The Passion of Joan of Arc will be the second screening of Camera Obscura, a section that’ll open tomorrow the 21st Las Palmas de Gran Canaria International Film Festival with Nosferatu, Friedrich Wilhelm Murnau’s iconic vampire that has just turned a hundred years old and who will light up Santa Catalina Park’s cultural hall with live music performed by Dutch lute player Jozef van Wissem. Five days later, on Wednesday 27, it will return to Miller’s screen accompanied by the International Bach Festival’s musicians. Finally, the section has also scheduled for Thursday 28 the screening of two other titles that are celebrating their centenaries: Nanook of the North, by Robert Flaherty, and Kino-Pravda’s 13th newsreel by Dziga Vertov, Elizaveta Svilova and Mikhail Kaufman. For this occasion, music will be performed by maestro Jonay Armas, Carolina Hernández and Juan Carlos Trujillo.