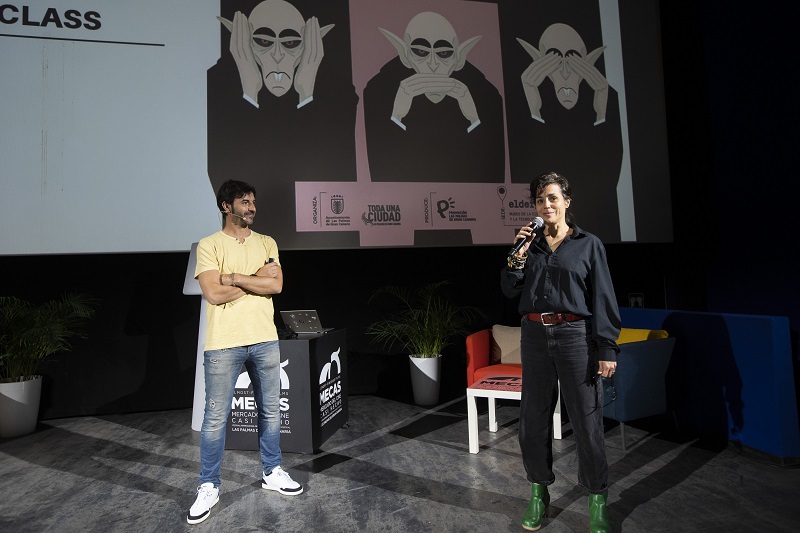 Las Palmas de Gran Canaria, Saturday 23 April 2022.- DobleSentido’s expert in marketing and communication Álvaro Vega opened this Saturday MECAS’ 5th edition with the masterclass El Pitch. 3 Máximas + 5 (Importantes) Claves [The Pitch. 3 maxims and 5 (important) keys]. Emotion, one of the three maxims, had a key role during the whole talk, “explaining a project with excitement is key to get the producers’ support; you shouldn’t read a pitch as a cooking recipe, instead tell a good story.” Álvaro invited them to be unique, to find their own voices, “if all of us follow the same instructions or tutorial, we’d all make the same and our projects wouldn’t stand out.” After the workshop, MECAS Island’s selected creators carried on at the Hotel Cristina by Tigotan with their personalized tutorials to work on the pitch they presented at the end of the day.

The afternoon started with an introduction given by Lorena Morín, director of the Market, who welcomed all attendees and thanked all collaborators, experts, participants and the market’s team for participating and thus making MECAS a success. She also thanked Luis Mirada, director of the Film Festival, for “giving me so much freedom and trusting me to create this event.” Luis pointed out the important work the director of the market has done throughout her 20 years working for the Film Festival, “she’s been a fundamental figure in this Festival’s programming.”

After their interventions, MECAS’ continued with the viewings of the Almost-Finished Films’ four projects, which showed their current cuts to the guest experts. Montaña sin nombre, by José Víctor Fuentes and David Pantaleón, Algo nuevo, algo viejo, algo prestado, by Hernán Rosselli, La parra, by Alberto Gracia and Sed, by Julia Solomonoff, were the first four projects presented in this section. The first day finished with the pitches of the MECAS Island’s four regional projects: Mi familia isleña, by Cristina Yurena Zerr, En la calle 24, by Alba Chaparro, 922-928, by Adrián León Arocha and Trans-star, by Bibiana Monje and Ana Sánchez-Gijón.

On Sunday, the second session will continue with the screenings and presentations of the projects selected for the Almost-Finished Films, Films-to-Be-Made and MECAS Island sections, chaired by film programmer Fran Gayo. At the same time, a retinue of guest international producers organized by the Gran Canaria Film Commission will travel around the island to get to know the landscapes, spaces and virtues Gran Canaria offers for film shootings. The visit will end with a work meeting among the thirty guest experts, that include festival curators, distributors, sales agents and producers.

On Monday, it will take place the institutional meeting with the regional, national and international retinue of producers present at the Festival, which is supported by Proexca in collaboration with the Gran Canaria Film Commission, Canary Islands Film and the Audiovisual Cluster of the Canary Islands. Likewise, the four projects that’ll be shot in the Canary Islands during 2022 will be presented at the Filmar en Canarias [Filming in the Canary Islands] event. And finally, Felicitas Raffo will deliver the workshop EAVE Production in which five guest projects participate.

On Tuesday morning, Miguel Machalski will teach the workshop EAVE Scriptwriting at the Hotel Cristina by Tigotán. Then the MEDIA program presentation will take place. After that, the event will finish at half past noon with the awards ceremony for the 2022 Almost-Finished Films, Films-to-Be-Made and MECAS Island winners.