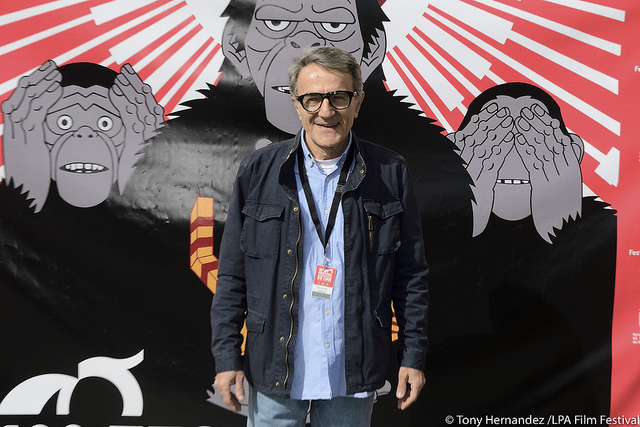 Zaza Khalvashi, Namme’s director, presented on Tuesday morning at the Pérez Galdós Theater his film, which is competing in the Las Palmas de Gran Canaria International Film Festival Official Section. It is a story essentially “about silence”, which revisits an old Georgian myth while proposing a metaphor in between tradition and modernity. Khalvashi, introduced by film critic and writer Antonio Weinrichter, went through the details and motivations behind his film in a press conference. Furthermore, he reflected on Georgian cinema’s current line, which seems to be blooming and presents a strong desire to enter foreign markets.

“It’s a pleasure being at this wonderful festival”, pointed out Khalvashi, who reminded that “the film depicts a family with a muslin son and another orthodox one… And then there is Namme’s character, the daugther, who also has a mystic nature, and who can heal with the waters, following her ancestors’ tradition. The father wanted all his children to be healers, is not happy with their religious inclinations”, although only the daughter inherits the gift in the end. “The story symbolizes the beginning of a new technocracy in this mystic world”, he finished.

The Georgian director explained how Namme’s idea came up: “I live in a mountain village. One morning I went out to my balcony and saw a branch covered with the first snows, and when the sun came up it began to melt… I could hear its astonishing sound when it fell to the ground, in the middle of that peace. Then I thought I should make a film that could explain this silence and how sound reverberating in that environment. Yes, I wanted to make a film about silence”, he emphasized.

“Sounds stress silence. The constant flow of water in the film only highlights it”, the filmmaker went on, and then added that the feature “is based on a quite ancient Georgian myth, and I wanted to explain how in this modern world new myths spring from there and enter our lives. I don’t know if it’s a good or bad thing, but this is happening today: you can feel it in our patriarchal Georgian society”.

“Namme”, finished Khalvashi, “is like a Medea who hasn’t known yet the sun: she is a normal girl who wants to live a normal life as a woman. When she falls in love she loses the possibility of healing people”.

Asked by the media about the evolution of cinema in his country, Zaza Khalvashi explained that “Georgian cinema was already different during the Soviet Union period: back then it was always pretty modern and progressive, and today it has kept that distinction. There have been new directors with new ideas in the last five years, and our Government has paid attention to this phenomenon: it’s funding projects, not only the commercial ones. It also provides support to artistic films”.

Namme’s director also said that “we know that by ourselves we can’t create good films, that’s why we seek coproductions with other countries. In my case, it is a Georgian-Lithuanian coproduction. These sort of collaborations help to show our films globally”.

Regarding the differences between his films and those by Georgian new generations, Khalvashi reminded that “I was born and raised during the Soviet Union period. Now we have young people who didn’t know that time, who make different films with other ideas, new producers, who are also capable of going worldwide. I hope Georgian films can find friends in Spain, too”, he pointed out smiling.

Weinrichter recalled the special section the 2017 Festival devoted to Georgian director Otar Iosseliani when proposing Khalvashi a reflection on this author’s importance within his country’s current cinema. Zaza Khalvashi took a “rather poetic” stance, although he noted these new Georgian filmmakers “do follow a more realist line of cinema, more like Iosseliani”. Nevertheless, Khalvashi admitted being surprised at “how his film has been liked by young people, more than I expected: it seems they also wish to see a more poetic cinema in Georgia”.