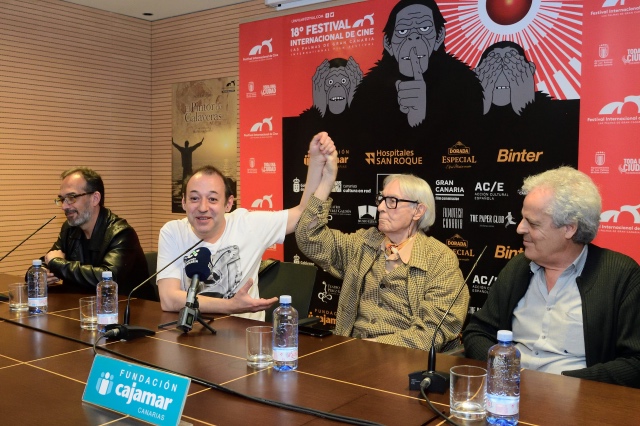 “I was literally dying. I’ve had three blows, my heart, two episodes of cancer… Making culture gives us happiness, that’s what I’ve considered during this whole process”. The artist himself has said so. And the thing is Pepe Dámaso’s health has defined the shooting schedule of El pintor de calaveras: a film that premieres at the opening ceremony of the eigteenth edition of Las Palmas de Gran Canaria International Film Festival, this Friday, at 8 pm, at the Pérez Galdós Theater. The film, by Valencian director Sigfrid Monleón and Canarian producer Andrés Santana. Dámaso, lively, talkative and always enthusiastic, presented with Monleón and Santana a film in which he assumes “I’m the man”, which freely and honestly deals with his life, his evolution as a person and artist, his homosexuality and his perception of art. The film, which starts with him leaving the hospital, “has not only given me life, it is a before and an after in my existence”.

It was Luis Miranda, the director of the festival, who introduced the press conference held at the Pérez Galdós Theater. For Miranda, El pintor de calaveras “is a film in which Pepe Dámaso is the absolute protagonist: we are lucky to have it for the opening ceremony of the festival; we could not open in a better way and there is no better way of closing the ceremony”.

Its producer, Andrés Santana, told, in a moving way, how took shape a project “that began a 15th of July, in 2015, when I went to see Pepe at his house: I saw him ill and thought it was not the right time. He told me the film gave him life, that I could not stop it. I said that if he got well, we’d make it. And right before I was leaving he promised he was going to get well if I made the film”. Santana confessed that Dámaso “was already texting me a month later telling me he had gained a kilo. A year later we were shooting when he leaving an operation. The film began there. In the end we’ve been able to shoot it in stages, and we’ve finished it a year later in Lanzarote”.

The producer said he was “very happy” with the final result: “it’s a film of emotions, whose cost I never thought of”. And he thanked the support of the Canarian institutions that pushed the project.

The director, Sigfrid Monleón, admitted that “I’ve always known a pletoric Pepe Dámaso, I didn’t know he was that ill. When Andrés told me it was the right time, we began. Pepe has always been ready for everything: to make a wonderful trip with this project. For me, he is one of the distinguishing features of the Island”.

Monleón said that the Las Palmas de Gran Canaria Festival “is very well-known out of here, with an outstanding selection of films. For us it’s a great honor opening it, with a great Canarian subject as Pepe Dámaso is”.

The director explained that “death is a very important thematic element in Pepe’s work: a close death you can talk to. We decided to build a film from here, because Pepe talks a lot about life transience, he celebrates the finite things”.

Dámaso spoke the last one in front of the media, in his usual tone and passion. “I have to say thanks: thank you Andrés, thank you Sigfrid, thank you Festival. I’m very tied to the city and feel very happy of being here, with this film. And I say film and not documentary: I like the debate on if there is ficion on the documentary, am I an actor or my real self? I like that debate a lot”.

“I was literally dying. I’ve had three blows, my heart, two episodes of cancer… Making culture gives us happiness, that’s what I’ve considered during this whole process”, admitted the artist. Dámaso praised both the director and the producer, when he pointed out “I’ve felt very safe with Sigfrid and Andrés. In the film I’ve been able to approach my art, my homosexuality, my concept of what is Canarian, of the Canaries’ tropicality… They are also the protagonists: the responsibles for the Pepes Dámasos they’ve seen. And I love that, because I have also confirmed the film is good”.

The Canarian painter seemed very pleased with the final product, with the poster (“I like it a lot”) and with the fact that it is premiering at the Pérez Galdós Theater, a recurring set in his professional career when collaborating with other artists. “I’m very happy”, he pointed out, to finally state that his film “has not only given me life: it has been a before and an after in my existence. The little miracle of me healing and the documentary being made happened…”

El pintor de calaveras is a film included in the Official Secton (out of competition), a section supported by Foundation Cajamar. The documentary will be screened again on Sunday, April 8, at noon, at the Monopol Multiplex.