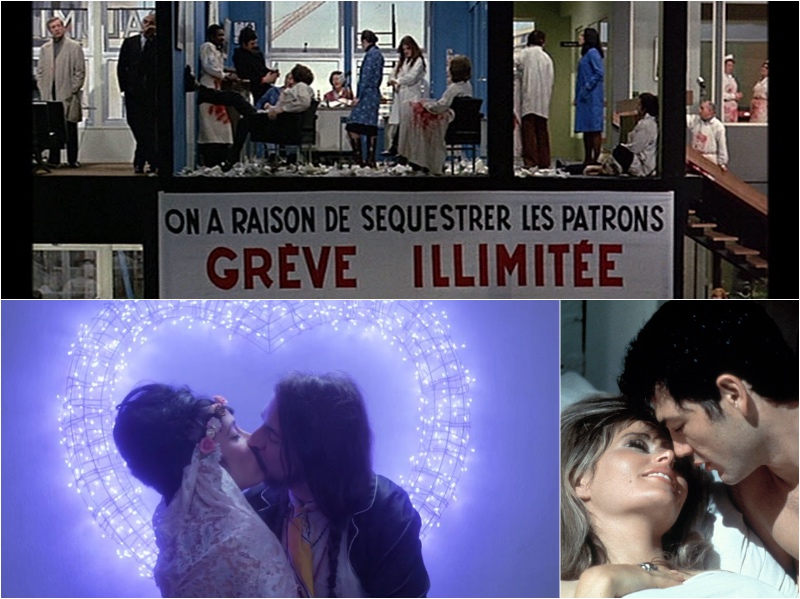 May 68, a reflection on a tumultuous period through Godard and Wexler’s eyes

It is essential to revive on the big screen this film by Godard starring Yves Montand and Jane Fonda; with a look that distances the actors from their characters, the filmmaker portrays the omnipresence of class struggle in multiple aspects of society and cinema. Suzanne, an American correspondent in France, and her husband Jacques, a declining avant-garde director, get involved in a factory workers’ strike. They are a couple in crisis in a society where there is only debris of the May events. Tout va bien’s first showing will be on Saturday, April 7, at 5:30 pm at the Monopol Screen 5.

That same afternoon, at 7:30 pm, at the Monopol Screen 6, it will be screened the American film Medium Cool, the first feature of the director of photography Haskell Wexler, in which, mixing a fictional story with documentary pictures, he focuses on the violence that sparked during the 1968 Democratic National Convention. His technique, the professional ethics and role of the media during a tumultuous social period, make this film politically and culturaly essential to the cycle May 68.

Weekend and family time. The section The Magic Lantern begins on Saturday, April 7, the animated films’ screenings for the little ones with two titles from last year: The Big Bad Wolf (B. Renner, P. Imbert, France, 2017, 79 min.), César Award for Best Animated Film in 2017, and Revoltin Rhymes (J. Schuh &amp; J. Lachauer, United Kingdom, 2016, 58 min.), an adaptation of Roald Dahl’s tales ilustrated by Quentin Blake, nominated to the Oscars for Best Animated Film in 2018 and winner of the same category at the 2017 BAFTA. These films will be screened in original version with Spanish subtitles. Check the schedule at lpafilmfestival.com

Director and playwright Antonio Morales joins the new wave of Spanish directors with his first film, Marisa en los bosques, a comedy-like story about a stage writer who at 35 years old is going through a personal crisis she cannot avoid facing. The screening of the film at the Las Palmas de Gran Canaria Festival will have Morales himself introducing the feature to the audience on Saturday, April 7, at 7:30 pm at the Monopol Screen 4. Marisa en los bosques, which has already been shown at Seville and Bogota’s festivals, among others, stars Patricia Jordá, Aida de la Cruz, Mauricio Bautista, Carmen Mayordomo, Yohana Cobo, Resu Morales, among others.

After his participation as the host of the opening ceremony, El Gran Wyoming shall offer his rock-and-roll side to the audience of the Festival. It will start on Saturday, April 7, at midnight, within the Monkey Nights programmed at The Paper Club. Wyoming and Los insolventes -Miguel Ángel Ariza (voice and guitar), José Alberto Solís (bass) and Carlos Lahoz (drums)- will give a rock-and-roll party with their versions of all-time great musicians, such as Chuck Berry or Buddy Holly. The ticket to the concert costs 8 euros and will be available at 11 pm at the club’s ticket counter.