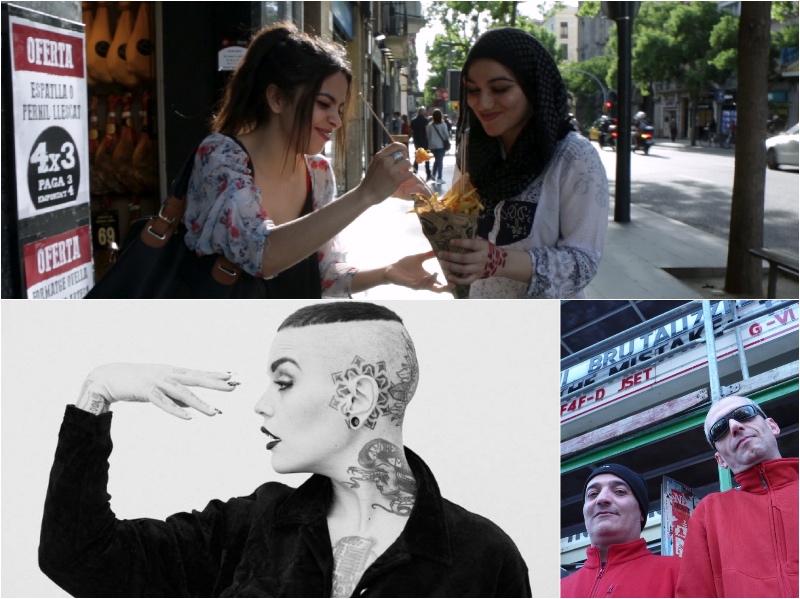 The new Spanish cinema also has its space within the Festival’s program. The director Nila Núñez will introduce on Friday, April 6, at 5:30 pm at the Monopol Screen 3 her first film Lo que dirán (Spain, 2017, 61 min.), the result of her participation as a student in the UAB’s Master’s Degree in Theory and Practice of Creative Documentary. In this documentary, which won the Best Spanish Film Award at the Gijon Film Festival, Nuñez depicts the relationship between two young muslim women that debate on the use of the hijab.

The film series May 68 includes in its program tomorrow Friday, April 6, at the Monopol Multiplex, an essential title in brilliant Carlos Saura’s filmography, Peppermint Frappé (Spain, 1967, 92 min.). With his career’s fourth feature, the Aragonese confirmed his incipient international career by winning for a second time the Silver Bear for Best Director at the Berlinale, an award he had already received with his previous film, La caza. Geraldine Chaplin, José Luis López Vázquez, Alfredo Mayo and Emiliano Redondo lead a story about love relationships and the bourgeois moral that initiated a radical change in the filmmarker’s film language. The screenplay written by Rafael Azcona, Angelino Fons and Saura himself and Elías Querejeta’s production provide even more arguments not to miss this screening. At 8 pm at the Monopol Screen 5.

One this festival’s favorite directors, Hong Sang-soo, again in Panorama

The Las Palmas de Gran Canaria Film Festival’s regular audience has two new opportunities to get closer to Hong Sang-soo’s work, one of this festival’s favorite directors, defined by film critic Jordi Costa as “the most French-like Korean director”. The Panorama Section, which, as film buffs already know, gathers last year’s best international selection, includes in this edition two films by the South Korean director: Geu-hu (The Day After) (South Korea, 2017, 92 min.) and Claire’s Camera (South Korea, 2017, 69 min.). The first one, which was at Cannes’ official selection in 2017, as well as at Munich, Karlovy Vary and Toronto, will be shown tomorrow Friday, April 6, at 7:30 pm at the Monopol Screen 3.

From the Russian Empire to Soviet Russia: October‘s special session

At Friday’s 10 pm, the Monopol Screen 3 will show one of the greatest titles in cinema history, October. Commissioned for the tenth anniversary of the Bolshevik revolution of 1917, this film recreates the events that led to the fall of the Russian Empire and gave rise to Soviet Russia, ranging from the first revolutionary efforts in February to the storming of the Winter Palace. This reimagining of the revolution is determined by Eisenstein’s pioneering style, as well as by the propagandist vision of violence and insurrection pushed by Stalinist authorities.

The festival’s opening day will end with music. At midnight, Vinila Von Bismark will be the star of the first “Monkey Nights” with a concert in which she’ll present “Motel llamado mentira” (Cachucha Records, 2017), being this the only concert the singer from Granada will give in the Canary Islands. On Friday, April 6, at the end of the opening ceremony at the Pérez Galdós Theater, the Latin rhythms of Vinila’s last work will take up The Paper Club’s stage, which will be occupied by Irene López Mañas’ genuine and magnetic image. After her, Fuckin Four Factory will be in charge of the night’s musical atmosphere.

The night at The Paper Club won’t be the last thing the festival’s night listens to. Wyoming’s band, made up of Miguel Ángel Ariza (voice and guitar), José Alberto Solís (bass) and Carlos Lahoz (drums), will give a concert at 12:30 am at the Nasdaq club to present Cultura caduca, a new exponent of their own repertoire that reminds sounds from the most genuine rock of the 60s and 70s.