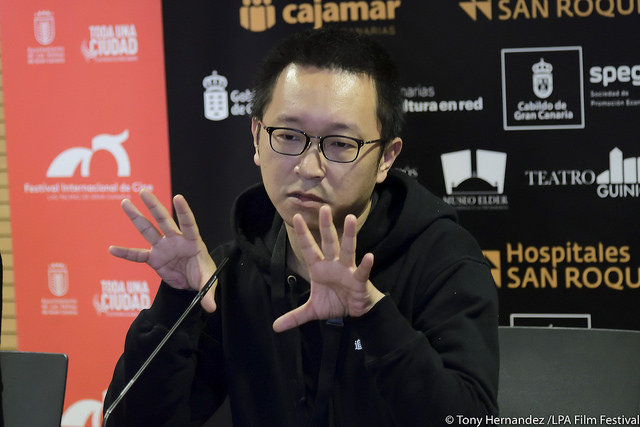 Director Li Xiaofeng presented this morning at the Pérez Galdós Theater his film Ash, another title competing in the Official Section (sponsored by Cajamar Foundation) of the Las Palmas de Gran Canaria International Film Festival. Xiaofeng was introduced to the media by Antonio Weinrichter the same day his work is shown at the festival for the first time. The Chinese filmmaker pointed out that “morals and love” are the most important aspects of a title which approaches a murder from the viewpoint of several characters living intertwined lives. This contrast between these lower-class characters who commit a crime and an upper class that seeks to increase their power enables Xiaofeng to dramatize in this film “the turn-of-the-20th-century China, in which a lot of people did whatever it took to achieve their goals”.

The psychology and feelings of the characters are the thing the concern this director the most, who admitted to be specially interested in those who “could end up committing this sort of criminal acts. Most come from the lowest stratums, and committing these acts is a way of getting out of the pit and changing their lives. But”, he continued, “in any case murder is an incorrect criminal act, upon which morals must prevail in the end. In particular, regarding the film, love and morals are the most important things”, he emphasized.

Li Xiaofeng explained that Ash “began to take shape eight years ago: initially, I didn’t have planned intertwined stories”. He also revealed that “it was the police who told me these sort of cases are really difficult to solve”, although he stressed the real intention of the film: “there’s a contrast between a low-class character who wants to get out of the pit and another upper-class one who wants to increase his power. I wanted to reflect what China was at the turn of the 20th century, which changes very quickly, and in which a lot of people decides to do whatever it takes to achieve their goals, even if it’s not right”.

“I personally recognized myself in the 90s decade and this film began to take shape in 1997”, added the director, who revealed some details about a long, complex and thought over creative process: “When I wrote the script I was constantly changing it”, he pointed out, “even when it was almost finished I changed the whole structure. The truth is that the result have left me really satisfied”.

The director decided to go, in the end, for intertwined stories because “I didn’t pretend to tell just a story, but many short ones, so that, in a compact way, it could reflect the psychology and feelings of the characters”.

Ash will be screened again at the Monopol Multiplex on Monday, April 9, at 10 pm.