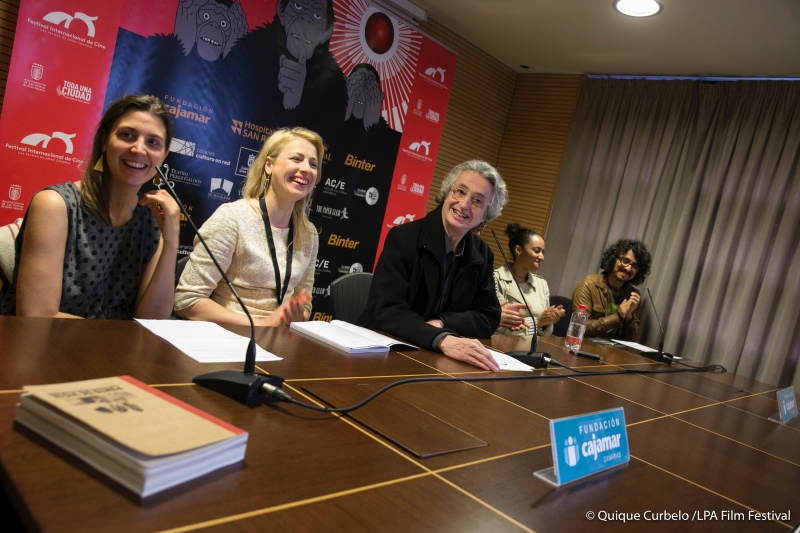 Directors Luis Ospina, Radu Jude and Anastasiya Kharchenko and actress Esther Elisha, members of the official jury —Alejandro Díaz Castaño, the directorof the Gijón Festival could not be present—, programmer Garbiñe Ortega, from the short film jury, as well as a popular jury representative, Antonio Valenzuela, have announced the awards this Saturday morning during the press conference held at the Pérez Galdós Theater. A decision that granted the awards among the twelve features and twelve short film that were competing in the official section, which has been supported by Cajamar Foundation once again.

The Pérez Galdós Theater’s Saint Saëns Hall will house today, at 7 pm, the Golden and Silver Lady Harimaguada Awards ceremony —which are titanium made replicas of Martín Chirino’s sculpture created through a 3D printing technique by the LPA Fábrika team—, as well as for the rest of the prizes.

Another of this edition’s winning titles is the Iranian film No Date, No Signature (2017, 104 min.), by Vahid Jalilvand, which has received unanimously the Audience Award; its main actor, Navid Mohanmmadzadeh, has won, too, the Best Actor Award.

Finally, the jury has decided to grant a Special Mention to the film Dita Zë Fill (Daybreak) (Albania, Greece, 2018, 85 min.), by Gentian Koçi.

In the short film category, the award has been granted to Menacho, Mi amado, las montañas (Switzerland, Spain, 2017, 10 min.), by Alberto Martín, because of, according to the jury, “the oddness produced by a coherent and organic mise-en-scène, which approaches death and life in a natural way, because of the mature way in which they portray different vital moments and because we think he is a filmmaker with a particular look we’d like to follow closely”.

In addition, the short film jury, made up of Garbiñe Ortega and directors Adrián Orr and Belén Funes, thought necessary to grant a special mention to Edge of Alchemy (USA, 2017, 19 min.) by director Stacey Steers.

During today’s closing ceremony at the Pérez Galdós Theater’s Saint Saëns Hall, which will be followed by a Dorada Especial tasting, the winners of the Canarias Cinema section, supported by Binter, will also receive their awards, announced last Monday, April 9. This section’s jury, formed by Miguel Rodríguez, founder and editor of Mundo Hispánico; writer and journalist Sabina Urraca and Vanesa Fernández, director of ZINEBI -International Festival of Documentary and Short Film of Bilbao. The experts granted the Richard Leacock Award for Best Feature Film to El mar nos mira de lejos (Spain, 2017, 93 min.), by director Manuel Muñoz, and the Richard Leacock for Best Short Film to Plus Ultra, by Samuel M. Delgado and Helena Girón, who have won it for the second year in a row.