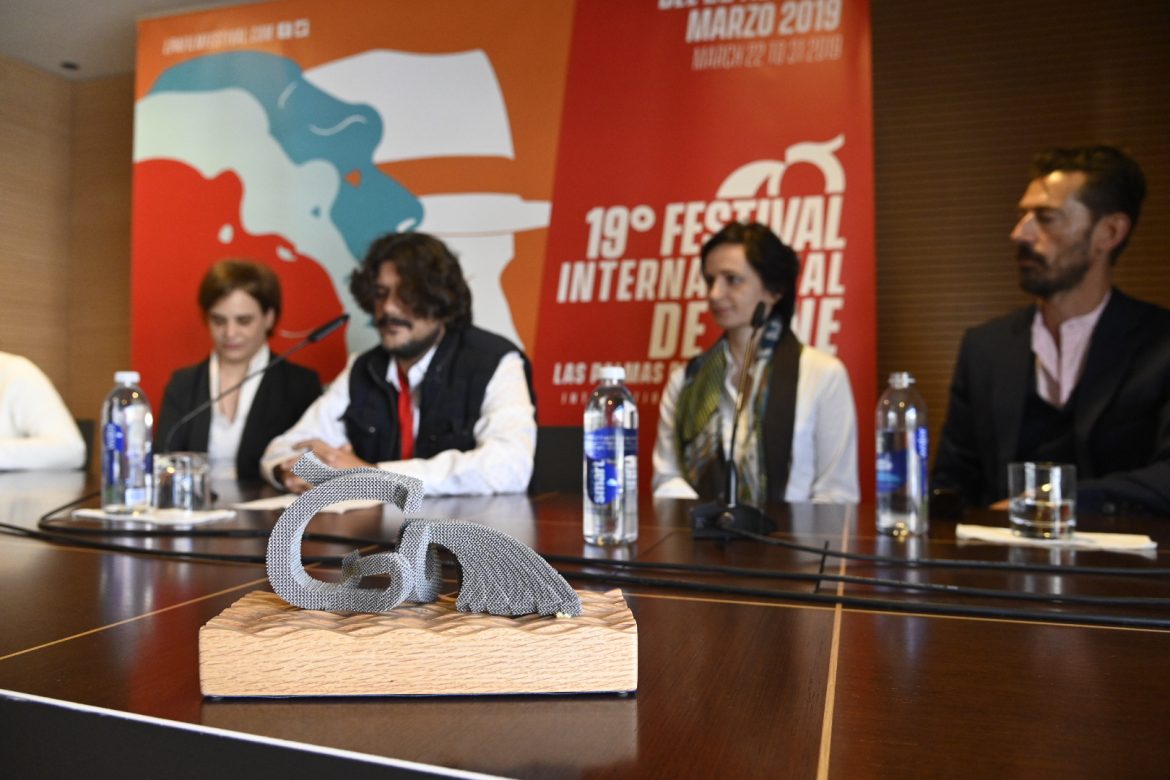 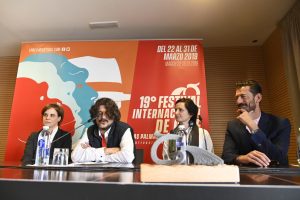 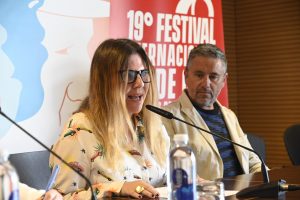 Las Palmas de Gran Canaria, Saturday 30 March 2019. The jury of the 19th Las Palmas de Gran Canaria International Film Festival has granted the Golden Lady Harimaguada to the Portuguese film A portuguesa (2018, 136 min.), by Rita Azevedo Gomes. The jury announced the award in a press conference held at the Pérez Galdós Theater this Saturday morning. Twelve features and twelve short films participated in the Official Section. The jury has valued from the Portuguese production “the author’s rigor, clarity and sensitivity to combine classicism and modernity in an unusual historic chronicle, in which the use of filmic time and pictorial esthetic stand out as extraordinary poetic tools”. The film, distributed in Spain by Numax, will be commercially released next April 26th.

The second award of this 19th edition, the Silver Lady Harimaguada, has been granted to the Chinese film The Fragile House (2018, 81 min.), by Lin Zi. From this feature, the jury highlights “the generational portrayal of a family who, beyond all conventions, captures contemporary China’s tensions and alienation by inventing a singular and fragmented film language in regard to the shot spatial dimension”.

The jury has granted, as well, a Special Mention to Mother I am Suffocating. This is my Last Film about You, by Lemohang Jeremiah Mosese (Lesotho, Qatar, 2019, 76 min.) “because of this first feature’s courage to create a film language that finds its own voice (and the collective voice of a continent) through the sophistication of the soundscape and the visual and narrative freedom”.

Another one of this edition’s awarded titles is the French film By the Grace of God (2019, 137 min.), by François Ozon, which has won for its lead actors, Melvil Poupaud, Denis Ménochet and Swann Arlaud, the ex aequo Best Actor Award.

The Best Actress Award was granted, ex aequo as well, to Snezana Bogdanovich, for her performance in Stitches (Serbia, Slovenia, Croatia, Bosnia Herzegovina, 2019, 97 min.), by Miroslav Terzić, and to Zita Hanrot, for her work in Paul Sanchez est revenu (France, 2018, 111 min.), by Patricia Mazuy.

In the Short Film Category, the award has been granted to Emmanuel Marre’s work, D’un château l’autre (France, Belgium, 2018, 40 min.). According to the jury, it is “a necessary film that responds to the social and political present we are currently living in. Besides, the director presents it to us in an honest, humble and moving way, with brilliant formal freedom”.

Likewise, the short film jury, made up of Alejo Franzetti, Liz Harkman and Gloria Fernández, thought appropiate to grant a special mention to Blessed Land (Vietnam, 2019, 19 min.), by director Pham Ngoc Lan, “because of its interesting mise-en-scène and elegant contrasts”.

CIMA Asociación de Mujeres Cineastas y de Medios Audiovisuales [Association of Female Filmmakers and Audiovisual Medium Female Workers] in the Canary Islands granted the Dunia Ayaso Award, designed by the recently deceased Martín Chirino, which, besides paying tribute to the Gran-Canarian filmmaker, will recognize either a woman that takes part in a film from the Official Section of the Festival as a director, producer, actress or team leader, or rather a film that promotes gender equality values.

CIMA members Marta de Santa Ana, Mariola Pestana and Silvia Sánchez, who made up the jury, granted the award to Elma Tataragic, screenwriter of Stitches (Miroslav Terzić, Serbia, Slovenia, Croatia, Bosnia Herzegovina, 2019, 97 min.) “for making visible, through the film’s screenplay, the drama of stolen children thousands of women from different parts of the world have suffered. For portraying the protagonist as a brave, determined, tenacious and not victimized woman. Because the story she has written reflects the supporting and solidarity network of those women who contributed, many years later and with all their surroundings against them, to get the truth known. And because it denounces the power abuse exerted by public institutions and women’s vulnerability”.

The CIMA jury also granted a special mention to Stitches‘ lead actress, Snezana Bogdanovich, “for her outstanding interpretation of the seamstress Ana. Restrained, her performance stamps with credibility”.

During the closing ceremony held this Saturday at the Pérez Galdós Theater, the winners of the Canarias Cinema competitive section also received their awards, which were announced last Monday, March 25th. The jury in charge of this section, sponsored by Binter, is made up of Andrea Guzmán Urzúa, cultural manager and filmmaker; Annamaria Scaramella, executive producer and programming coordinator of the Márgenes Festiva; and film critic Manuel Zapata. The experts have granted the Richard Leacock Award for Best Feature Film to La ciudad oculta (Spain, France, Germany, 2018, 80 min.), by director Víctor Moreno and the Richard Leacock Award for Best Short Film to 300 Todo incluido (2019, 14 min.), by Pablo Fajardo.

In Canarias Cinema there was a third prize for one of the four features competing in the section: a Special Mention for En busca del Óscar [Searching for Oscar] (Spain, 2018, 72 min.), a film by Canarian filmmaker Octavio Guerra. The jury highlighted not only “the ironic and auto-parodic proposal”, but also that “it is a feature film that satirizes the role of those who, like us, work in judging other people’s works and that also celebrates an unbiased view of this world without forgetting about a deep and trascendence trace”.

Best Actor Award
Melvil Poupaud, Denis Ménochet and Swann Arlaud for her performances in By the Grace of God (François Ozon, France, 2019, 137 min.).

Jury Special Mention
Mother I am Suffocating. This is my Last Film about You (Lemohang Jeremiah Mosese, Lesotho, Qatar, 2019, 76 min.)

The Las Palmas de Gran Canaria International Film Festival, which has strengthened for another year its commitment to a philosophy devoted to talent, to films born without commercial intent, away from conventionalisms, had in 2019 the support of the Ministry of Culture and Sport (through the ICAA); the Agencia Cultural Española (AC/E) [Spanish Cultural Agency]; the Canarian Government (through Canarias Cultura en Red and Canary Island Film); the Cabildo de Gran Canaria [Gran Canaria Island Council], thanks to the SPEG and the Gran Canaria Film Comission; the University of Las Palmas de Gran Canaria (through the Aula Manuel Alemán); the Clúster Audiovisual de Canarias [Canary Islands Audiovisual Cluster]; the Escuela de Cine de Madrid (ECAM); European Audiovisual Entrepreneurs; the CIMA association and the Casa de Colón.