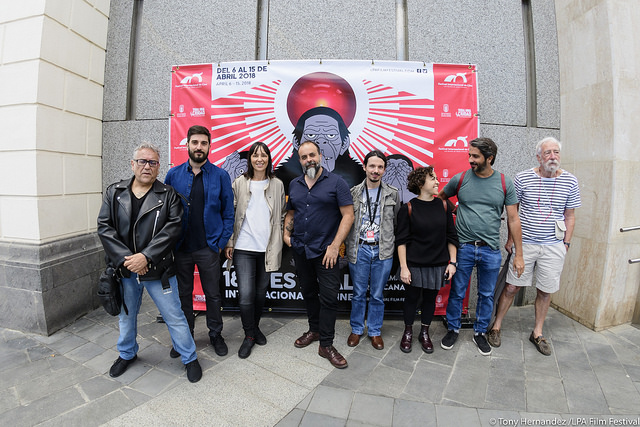 The first group of works that make up this edition’s Canarias Cinema section share the common denominator of looking at the past with other eyes, another perspective: another view of the historical past, of classical cinema, of the traditional author or even the Islands’ previous amateur films. This section’s first group of filmmakers, authors of local productions, manifested to the media this Saturday, April 7, at the Pérez Galdós Theater, their deep concern over transferring to the big screen their personal styles in a generation of creators that seems to stand out because of their special preference of looking back in a different way.

Víctor Rosales, coordinator of the festival’s program, stressed that the film selection included in Canarias Cinema “has been complicated, like always” right before introducing the directors of the features Las postales de Roberto (Dailo Barco) and Bárbara Nadie (Ayoze García), as well as the short film directors Daniel Mendoza, Miguel G. Morales, Sara Álvarez, Rafael Marrero, Macu Machín and Rafael Navarro, who besides Barco repeats in this section.

The authors themselves summed up the spirit of these works which, in the case of the short films, make up an 82-minute-long group in the first part Canarias Cinema saves for them.

Thus, Rafael Marrero, author of the Swedish-Spanish coproduction Dualité, explained that “my work deals with people’s inner conflicts, with duality, from the masonry viewpoint”. A visual piece, full of hidden codes ready to be deciphered by the audience, that does not tell a conventional story and that seeks to highlight the emotions suggested by the onscreen symbols.

Sara Álvarez, member of the Pestaña Cíclope group (a gathering of actors, directors and technicians who has met in film festivals in the islands), author of the short film Diques, says that “it talks about the surrounding social and emotional walls that build us, about those dikes”.

Rafael Navarro is the director of Soju, “a conversation between two strangers and a tribute to the 60s and 70s auteur cinema. I wanted to make an avant-garde minifilm today. My intention is to show it here, at this Festival, because it makes me very excited”, explains the author, who insisted on the references to classical auteur cinema.

Daniel Mendoza, author of 20 años sí es mucho, presented a piece that “is a false documentary about an event that happened last october: the decision of an individual we included in the piece”, an Uruguayan-Spanish coproduction that seeks to keep growing towards the feature format.

Miguel Morales is the one responsible for Ángel caído, a short film he defines as “a film archive investigation about several buildings that still exist in Tenerife that spins around the axiom “the Franco Regime cannot be judged as long as it remains alive, and as long as it remains alive it cannot be judged”, a clear exercise of historical memory.

Macu Machín has come to the Festival with El mar inmóvil, a work that “was made for Lanzarote’s Bienal: the challenge there was to freely work on Agustín Espinosa’s Lancelot. For me it was a double challenge because I had to work with a landmark of Canarian literature, but I also had to translate Espinosa’s imagination to my territory, which is the documentary”, explained the author.

Finally, Dailo Barco competes in the Canarias Cinema Short Film section with Archipiélago fantasma, an experimental piece about the first Canarian film, El ladrón de los guantes blancos: “I found there one of Spanish Civil War’s missing persons, I use the short film to bring back to the present a silenced story”, points out the director.

Barco takes part as well in Canarias Cinema with Las postales de Roberto, which “comes from the same movement” that his short film, which is “my approaching to the Canarian Film Archive to work with past materials as a filmmaker of the present”. In this film, the director establishes “a dialogue with a 70s filmmaker, in the Canaries’ period of amateur cinema, Roberto Rodríguez. Through his story we can also rebuild an era”.

Raíces, El mar nos mira de lejos and Telúrico also compete in this Canarias Cinema Feature Film section. “There are two other features like Bárbara Nadie and Apocalipsis Voodoo that we thought interesting to screen out of competition”, explained Víctor Rosales.

Precisely, Ayoze García, also a member of the Pestaña Cíclope group, is the director of Bárbara Nadie, a film of appropiation from Frank Capra’s film Meet John Doe (in public domain) to “make its protagonist, Bárbara Stanwyck, dissapear, an actress who has been casted into oblivion nowadays”. González points out that “in the editing emerges a story about journalism, media manipulation and the process of film editing itself. There’s a character who is hired in a newspaper to substitute the columnist, Barbara Stanwick: that happens to be me”.

Looking at the past

Most of these works, to a greater or a lesser extent and with a vocation more or less personal or informative, point towards the past to approach it from a different perspective. Dailo Barco agreed on this point that “defending the past is a generational need, not only of telling our history but also of how we are able of transforming our view of history, which in the end is a battle between stories”. Then he added “For me everything is the present. I find in my generation that concern, because I think we have lived with a wicked tale”.

Rafael Navarro, Soju’s director, added that his short film “also feeds from the same content”, to recall the past auteur cinema, “that can be seen nowadays at the cinema club”. Ayoze García remembered, too, that “in my case, I’ve been fighting with a 1941 film and, as a journalist, it surprises me that already at that time there’s talk about Fake News, with the same term applied today, with an ongoing Second World War: the whole change of USA’s mentality to enter the war is getting constructed”.