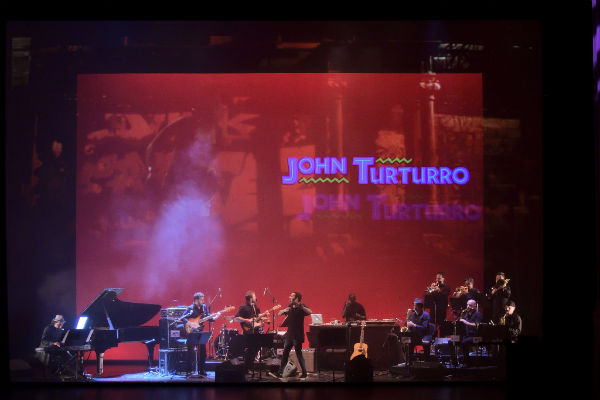 The Monkey Business Band of 2017, in the opening ceremony. Picture: Tony Hernández.

Las Palmas de Gran Canaria, Tuesday, March 27 de 2018. The Monkey Business Band, the group that was born to musically dress the opening ceremony of last Las Palmas de Gran Canaria International Film Festival, changes in 2018 to pay musical homage to May 68. Under Sergio Miró’s direction -he will also be on drums- next Friday, April 6, the Monkey Business Band shall revive at the Pérez Galdós Theater the musical memory of that May 68, a historical landmark that now celebrates its 50th anniversary and in whose honor the Festival has prepared one of this edition’s film series: “May 68”.

“Every song the band is going to play belongs to that time and many of them make specific allusions to some of the values, ideas and events of that revolution”, says Miró. This musical selection is far, nonetheless, from only staying in songs with utopic or activist values. According to Miró, the catalog “takes into account several of the musical viewpoints active at that time, from the chanson that lights young spirits in the Paris events, to the soul and funk, the incendiary rock and even the popular song in Latin America, where they lived their own revolutions”.

The band, “multi-generational and versatile”, has gathered its members from the most renowned groups within the Canarian scene, some of them still growing: Birkins, Banadú, Aburrido Cósmico, The Blues Riders, LAJALADA (Bel Bee Bee), The Good Company, Los Coquillos and Baton Rouge Dixieland, as well the special collaboration of two founding members of Sangre de Cóndor. Together, the Monkey Business Band represents to a large extent some of the “most creative and renowned pop, rock, blues and funk bands made up in the Canary Islands”.

The Las Palmas de Gran Canaria International Film Festival shall open its eighteenth edition with the premiere of El pintor de calaveras, a documentary film produced by Andrés Santana and directed by Sigfrid Monleón about Pepe Dámaso, a universal artist whose work has been exhibited in places such as Dakar, Lisbon, Copenhagen, New York, Paris, Venice, La Habana, Belgrade or Jerusalem.

El Gran Wyoming will be the one conducting the ceremony, which will be attended by the members of the juries, guests and the coordinators of the different sections of the Festival. In addition to this film-and-television popular figure, José Miguel Monzón Gran Wyoming, the opening ceremony will also count on two great names within the theatrical sphere: José Luis Massó and Luis O’Malley, whose work will be visible through the artistic and stage direction of the night, since the Festival’s team has given this job to the Canarian production company 2RC Teatro.