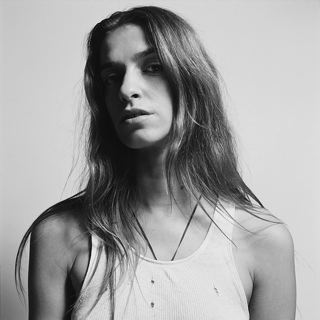 Joana Preiss is a stage and film actress, singer, performing artist and filmmaker. She has performed in shows by Pascal Rambert (Gilgamesh / Antoine & Cleopâtre, etc.) and Eleonore Weber (Vivre une vie vivable n’a rien d’une question vaine). She has appeared in films by Christophe Honoré, such as Ma mére (2004) or Dans Paris (2006), as well as in works by Olivier Assayas such as Clean (2004) and Noise and Boarding Gate (2007), and films by Antoine Barraud (Le dos rouge), among others. She has collaborated also with artists such as Nan Goldin, Ugo Rondinone and Celeste Boursier Mougenot.

After studying classical singing and contemporary music she founded in 1998 the experimental duo “White Tahina” together with Vincent Epplay. Among other projects she has created “Performances uniques” with organic improvised compositions in which she uses her voice as an instrument, sometimes a capella, using at the same time art pieces or collaborating with musicians (like her son, guitar player Lou Rambert Preiss). She performed at the Fondation Cartier, the St. Merry Church, the Kamel Mennour art gallery, the Louis Vuitton cultural space in Paris, and the Castello Sforzesco in Milan, among others.

Her first feature film as a director is Siberia – a mix of art, documentary and auto-fiction. It was included in the international competition at FID in Marseille in 2011, and in other international film festivals. Siberia was released in Paris’ movie theaters in 2012, as well as all over France and Europa. Silent Asylum, one of the short films she directed, was in Cannes Directors’ Fortnight in 2013.

Today, she’s working on her next art-documentary-fiction film related to the bullfighting world.