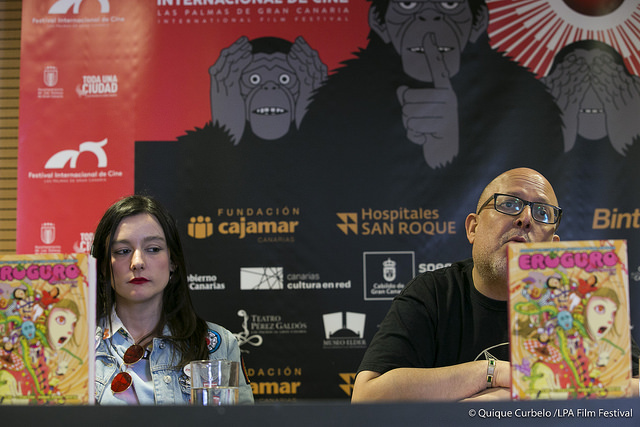 Jesús Palacios, writer, film critic and a regular in the Las Palmas de Gran Canaria International Film Festival since its foundation, presented on Monday morning, April 9, the book Eroguro, horror y erotismo en la cultura popular japonesa (Editorial Satori, 2018) as the coordinator of this publication, co-written with several experts, and which includes unpublished short stories by Japanese authors and a varied collection of original illustrations. Palacios stressed, on the book’s first official presentation, the connections it has with the festival, “always on the lookout for horror and oriental films”, and then he emphasized the peculiarities of a genre that stands as a counterpoint to the most traditional Japan, “in which there’s much cinema”.

Thus, in Eroguro there are texts by, besides Palacios himself, Daniel Aguilar, Rubén Lardín, Iria Barro Vale and Germán Menéndez Flórez. The book includes unpublished short stories by Junichiro Tanizaki, Edogawa Rampo and Unno Juzo. And it has been published with original illustrations by Miguel Ángel Martín, Sandra Uve, Félix Ruiz, Albert McTorre, Suki, the Canarian Pablo Morales de los Ríos and Lolita Aldea, another one of the book’s significant features Palacios highlighted.

The writer went deeper into Eroguro’s antecedents, “at the beginning of the 20th century, the 20s and 30s, it’s when this term comes to light, in a period in which Japan passionately opens to the West, to elements foreign to Japanese culture but which are received with excitement in the country, from the political to the artistic movements”. Then, he continued, “an appropiation with native elements, with ways of seeing life that are, above all, Japanese” occurred.

Eroguro’s connections to the Festival

Palacios pointed out that this “is a book which in someway owes a lot to many different collaborators, not only to the writers, but also to those who have granted us access to the films we discuss: among these people and institutions is undoubtedly the Festival, which, since its creation, has always been on the lookout for Japanese films, and that promotes The Freakiest Night, which has screened some of these films. I am pretty glad for being at this festival with this book, one is quite related to the other”.

Palacios, author of works such as Psychokillers, Goremanía, Los ricos también matan, Nosotros los vampiros or Hollywood maldito (among many others) and collaborator of the Gran-canarian festival since its very beginning (being in charge of The Freakiest Night’s coordination) added that “a lot of those who collaborate with this festival, including me, are devoted fans of Japanese cinema, Luis Miranda, the director, also among them. In many conversations we’ve had certain subjects have come up which later had their importance in the making of this book. This is a proper platform for the book’s first official presentation”, which has just been released this April.

Iria Barro Vale: “We’ll never know for sure if it’s the West the one influencing Japan or the other way around”

Together wih Palacios, another author included in the book, Iria Barro Vale, presented it. She was in charge of the text about Manga: “I talk about the antecedents of what’s been called Eroguro Manga”, and about the different phenomenons surrounding this genre, graphic war stories with social critique, violence and “savage risqué stories”. Barro also tackles subjects such as the influence of Western architecture in the Eroguro, “the new flesh”, Cyberpunk and the concept of an organ-less body.

“We’ll never know for sure if Japan has been influenced by the West or up to what point it’s been reversed”, pointed out the writer, who also went over a list of referential manga authors related to the Eroguro, and to its darkest side, which constitute an important part of the book edited by Satori.

“The Eroguro is aimed at anyone who likes reading it. Now, with the climate there is today regarding women’s humiliation, there’ll probably be people offended by this book. I believe that when it comes to fiction there shouldn’t be any problem. It’s not an ideal reading for a child, but mainly for adults, actually anybody interested in Japanese culture can enjoy this book”.

Monopol Multiplex will screen this Monday, April 9, at 7 pm, the film Môjú, which will be introduced by Jesús Palacios, who says it is one of the classics related to the Eroguro.