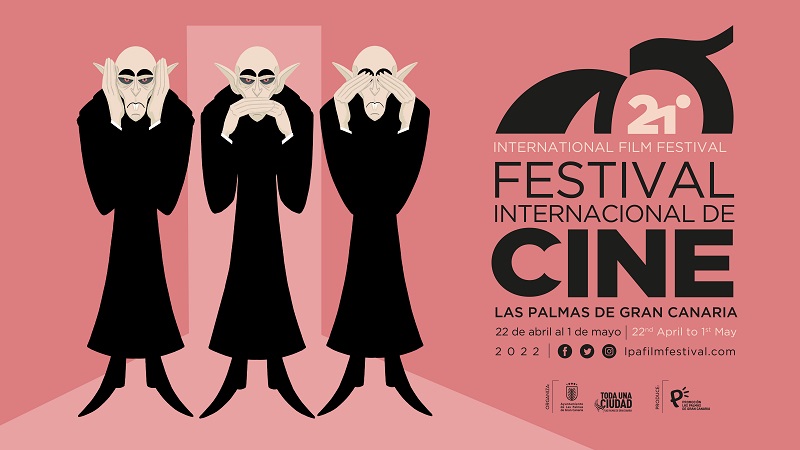  Two exceptional guests will come to the Festival: Lucile Hadzihalilovic and Sean Baker, both of whom will have their own retrospectives

 The catalogue and programming schedule of this 21st edition are available at the official web lpafilmfestival.com

Las Palmas de Gran Canaria, Thursday 21 April 2022. The Las Palmas de Gran Canaria International Film Festival has got to its 21st edition, which opens this Friday, April 22. Until May 1 the audience will be able to enjoy a Festival that’ll screen nearly a hundred titles made from the margins of the industry and removed from conventionalisms and the most commercial approaches. An event celebrated at full capacity for the first time since the beginning of the pandemic.

The 21st Festival will start at Miller with a special screening of Nosferatu, Friedrich Wilhelm Murnau’s greatest success, whose premiere took place a century ago in Berlin. The screening will be accompanied by live music performed by renowned Jozef van Wissem, a Dutch lute player based in Brooklyn (sold out). An opening ceremony that’ll be conducted by El Gran Wyoming and that’ll be followed by a concert given by Dómisol Sisters. Admission to the musical performance, scheduled at 10 pm, is free until seating capacity is reached.

The beginning of the Festival coincides with the opening of the 2nd Film Conferences, an event that’ll gather in Las Palmas de Gran Canaria three important individuals from the acting sphere: Jose Coronado, Candela Peña and Raúl Arévalo, who will give a talk that same Friday at 4 pm at Miller; and three fundamental directors in Spanish cinema: Imanol Uribe, Daniel Monzón and Daniel Sánchez Arévalo, who will meet the public on Saturday at the same time and place.

That’s how it will start the Festival, which will screen around a hundred films distributed among its different competitive and non-competitive sections: the Official Section; Canarias Cinema, devoted to films made in the Canary Islands or by Canarian people; Bande à Part, for the boldest films; Panorama, which will bring filmmaker Gaspar Noé to the Festival; Panorama Spain, turned this year into a competitive section; in addition to Camera Obscura with screenings of silent films and live music; Déjà Vu, which recovers films that are part of cinema history, and The Freakiest Night, programmed by Jesús Palacios.

A festival that’ll count on the presence of two exceptional guests: Lucile Hadzihalilovic and Sean Baker, both of whom will have their own retrospectives and who will meet the audience, respectively. Film buffs shall enjoy six of the fantastic and psychological titles by the French director, screenwriter and producer, as well as a selection of films by one of the most recognized American authors of the last decades and an essential member of North American indie cinema. In addition to all these, there’ll be a tribute to the late Roberto Pérez Toledo that’ll be accompanied by the screening of 6 Points About Emma.

The iconic vampire that’ll open the Festival, Nosferatu, will have a second screening with live music by the International Bach Festival Canarias. Furthermore, the successful section of the Festival Camera Obscura will show two other hundred-years-old titles, Nanook of the North, by Robert Flaherty, and one of Kino-Pravda’s 23 newsreels —the 13th— by Dziga Vertov, Elizaveta Svilova and Mikhail Kaufman released in June, 1922. These two screenings will be accompanied by maestro Jonay Armas, Carolina Hernández and Juan Carlos Trujillo. Camera Obscura has also recovered The Passion of Joan of Arc, released by Carl Theodor Dreyer in 1928, which will be shown with sound provided by expert on historical instruments Carlos Oramas.

The Official Section will offer a selection of ten features and twelve short films, one of them out of competition. This selection includes fiction and non-fiction, political essays, pandemic dramas, personal crisis, losses and other topics. A sort of cinema “resistant” to the system and the conventional ways of portraying reality, works that challenge and demand reflection from the audience.

In addition to the 21 works from the Official Section, there are nine more competing in Bande à Part. The boldest cinema comes back to this section of the Festival created last year. Nine other works make up Panorama Spain, which has become a competitive section for the first time in this edition with five features and four short films. And fifteen short films and three features will compete in Canarias Cinema. Thus, a total of 57 titles will compete for the awards of this 21st edition.

Regarding non-competitive sections, Déjà Vu recovers two titles from the work by one of the most famous faces in Japanese classical cinema, Kinuyo Tanaka, as well as five others by different authors, among them The Path, by Spanish Ana Mariscal. Panorama, a section that brings works by filmmakers that have appeared at the Festival as well as by new voices currently standing out within the circuit, includes half a dozen titles. The Freakiest Night, the Gran-Canarian festival’s marathon of fantastic, wild and horror cinema programmed by writer and film critic Jesús Palacios, will be divided into two sessions this year. And Magic Lantern’s program oriented to young and family audiences and, in particular, the industry’s young talents in the Canary Islands. To this end, the section will screen two films aimed at children and teenagers, in addition to including activities aimed at industry-related students (acting and audiovisual).

In total, there’ll be 55 features and 40 short and medium-length films, distributed into 134 screenings throughout ten days at Cinesa El Muelle and the Miller, whose screens will light up again this year to celebrate this city’s cinema party.