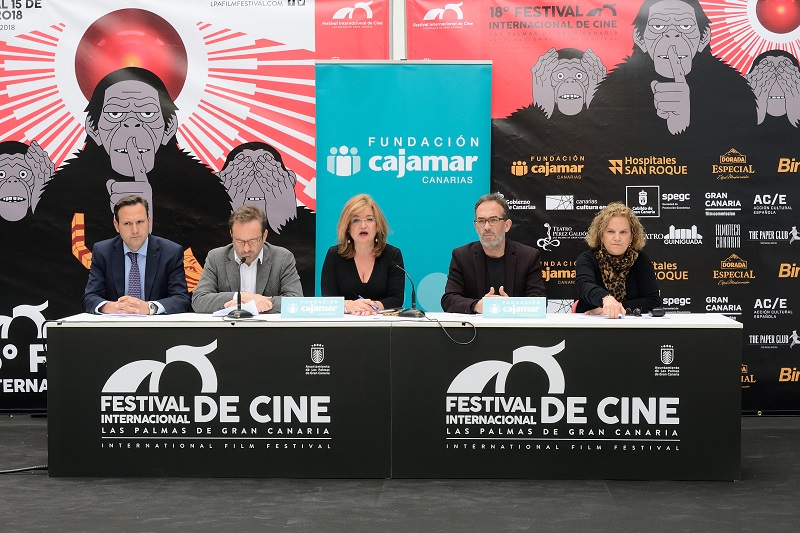 Las Palmas de Gran Canaria, Wednesday, March 21, 2018. The Las Palmas de Gran Canaria International Film Festival will open its eighteenth edition next Friday, April 6, with the screening of El pintor de calaveras, a documentary film about artist Pepe Dámaso directed by Sigfrid Monleón and produced by Andrés Santana. Thus, the program will have officially started, with an out-of-competition film that is the only Spanish one within the Official Section. Afterwards, and until April 15, thirteen more films will be released in Spain at the Pérez Galdós Theater’s screen, competing twelve of them for this edition’s awards, whereas another one will be screened out of competition: Hmyz (Insects), by Jan Svankmajer (Czech Republic, 2018, 98 min.).

This way, the 18th Film Festival seeks to keep its commitment to opening a window to the wide field of non-commercial cinema in all the variety of its current practices and trends, as well as in all its geographic and cultural diversity. So it was advanced in this morning’s presentation to the media by Encarna Galván, the councilwoman of Culture of Las Palmas de Gran Canaria’s City Council, and by the director of the Film Festival, Luis Miranda, who came accompanied by the representatives of some of the organizations and institutions that support the film festival, such as the Canarian Government, through Canarias Cultura en Red [Canarias Culture in Network], the Guiniguada Theater, which will be the seat for the Market, and the Elder Museum of Science and Technology, whose big screen will show the audience the Red Star cycle; the inter-island council of Gran Canaria, through the Sociedad de Promoción Económica de Gran Canaria [Gran Canaria Economic Promotion Society] and the Gran Canaria Film Commission, two institutions closely linked to the development of the Market; the Auditorio Teatro Foundation, which will once again become the big showcase for the Official Section’s films; Acción Cultural Española (AC/E), through its Programa para la Internacionalización de la Cultura Española (PICE); and Cajamar, whose Cajamar Canarias Foundation repeats for a third time in a row as the main sponsor of the competitive section. Hospitales San Roque, Binter and Dorada Especial have also wanted to show in 2018 their solid commitment to culture by supporting in different ways the eighteenth edition of the film festival.

Insects, the Czech film by the animation genius and surrealist artist Jan Svankmajer, to whom the Festival devoted a film series in 2010, will be a part, out of competition, of an Official Section that appears to be highly Eurasian oriented, since, apart from the selection of de El espanto (The Dread), by Martín Benchimol and Pablo Aparo (Argentina, 2017, 65 min) and The Green Fog, by Guy Maddin, Evan Johnson and Galen Johnson (USA, 2017, 61 min), the rest of the films competing for the Golden Lady Harimaguada come from Eurasia. Five of the twelve selected titles are Asian: Balekempa (The Bangle Seller), by Ere Gowda (India, 2018, 103 min); Bedoone Tarikh, Bedoone Emza (No Date, No Signature) by Vahid Jalilvand (Iran, 2017, 104 min); Van Pao Te (Father to Son) by Hsiao Ya-Chuan (Taiwan, 2018, 114 min); Xiao Gua fu Cheng Xian Ji (The Widowed Witch), by Cai Chengjie (China, 2018, 120 min); and Zhui Zong (Ash) by Li Xiaofeng (China, 2017, 113 min). Besides, the British production Barley Fields on the Other Side of the Mountain, by Tian Tsering, turns its gaze to Asia, in particular to the remote mountains of Tibet.

The rest of the official program is made up of the following works: Dita Zë Fill (Daybreak) by Gentian Koçi (Albania, Greece, 2018, 85 min); Meshok Bez Dna (The Bottomless Bag), by Rustam Khamdamov (Russia, 2017, 104 min); Namme, by Zaza Khalvashi (Georgia, Lithuania, 2017, 91 min); and Transit, by Christian Petzold (Germany, 2018, 101 min), a film that will be released in Spain thanks to Golem’s distribution after been screened at the Gran-canarian festival and at the Berlinale, in which it stood out as one of the favorites to win the Golden Bear.

These are films from 2017 and 2018, with a wide résumé at important film festivals, which has turned into places for interesting intellectual debates about the multiple ways of thinking and making cinema.

The fourteen features films (two out of competition) and the twelve short films were selected among a total of 588 submitted works (246 features and 342 short films), which were watched by the Selection Committee together with the 79 submitted to Canarias Cinema and other 150 films analyzed for the composition of the film series: May 68, Red Star and Radu Jude 4½+4, as well as the regular sections of the Festival, such as Panorama, Panorama Spain, The Freakiest Night and The Magic Lantern, whose program is already available at the website lpafilmfestival.com.

Altogether, the audience will be able to enjoy ten days of cinema, 136 films programmed in 210 sessions in which it has been distributed the content of each section.

Panorama and Panorama Spain remain as sections that follow up key authors in the festival circuit and who are positioned within that other cinema protected by film festivals.

Jesús Palacios will coordinate once again The Freakiest Night, a marathon which presents this year three brief and shameless short films: Clanker Man by Ben Steiner (UK, 2017, 10 min.); Saatanan Kanit (Fucking Bunnies) by Teemu Niukkannen (Finland, 2017, 17 min.) and Stay by David Mikalson (USA, 2017, 8 min.) and three uneasy, violent and weird feature films: Game of Death by Sébastien Landry and Laurence Baz Morais (France, USA, 2017, 75 min.); Matar a Dios by Caye Casas and Albert Pintó (Spain, 2017, 90 min.) and The Uncle by Kim Hyoung Jin (Corea del Sur, 2017, 99 min.). In addition, Palacios will present a book which introduces the reader into the Japanese artist movement Eroguro, that will be followed by a special session of de Môjû (Blind Beast) by Yasuzo Masumura (Japan, 1969, 86 min.) presented under the epigraph of EROGURO AD HOC.

The Magic Lantern will screen two family titles, one per weekend: Le Grand Méchant Renard et Autres Contes by Benjamin Renner and Patrick Imbert (France, 2017, 79 min.) and Revoltin Rhymes by Jakob Schuh & Jan Lachauer (UK, 2016, 58 min.), besides five works about the digital and online world that will be shown in arranged screenings to students from Secondary School.